Cory Doctorow is a Canadian-born journalist and science fiction writer who co-edits the blog Boing Boing and writes on topics ranging from tech culture to copyright law. His extensive body of work includes titles like Information Doesn’t Want to Be Free: Laws for the Internet Age, and the YA graphic novel In Real Life, about girl gamers. A vocal proponent of information access, Doctorow has released numerous works under a Creative Commons license, allowing readers to download digital versions of his books for free.

Leading up to his May 11 keynote speech at the 2016 BC Library Conference, Doctorow took some time from his busy schedule to answer a few questions for Perspectives via e-mail. 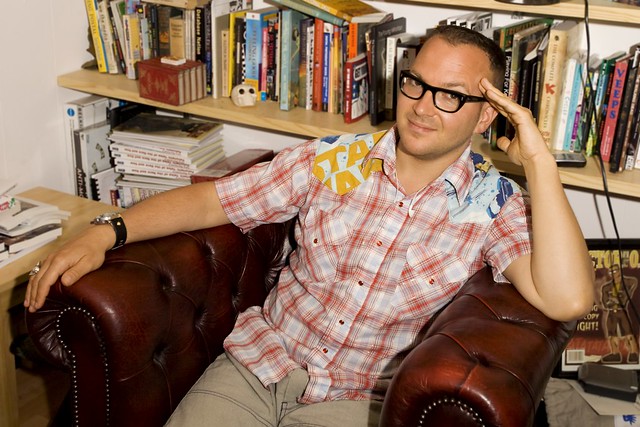 Perspectives: You have been selected as the keynote speaker for this year’s BCLA conference. Aside from the fact that you are an award-winning author whose books can be found on many library shelves, how would you describe the work you do as being relevant to libraries today?

We live in the information age. The questions of how to regulate, share, create, improve and aggregate information are more vital now than they have ever been. A car is a blob of information-processing gear inside a ton and a half of lethal composites with a squishy human strapped inside it. There has never been a moment when people who agitate about information needed each other more.

Perspectives: As a science fiction writer you have a keen ability to imagine alternate realities. Do you have a vision of what libraries will look like in the future? How do you envision developing technologies and accompanying policies affecting the role of libraries in society?

Doctorow: As a science fiction writer, I have a keen sense of how dumb science fiction writers look when they try to predict the future! We’re Texas marksmen: we shoot shotguns into the side of any handy barn and draw a target around the place where the pellets hit, then declare ourselves to be deadeyes.

Science fiction doesn’t predict the future, but it plays a significant role in how we think about the present, and that’s a lot more interesting (the present is the moving wave-front where the past becomes the future).

The present of libraries is to be implicated in every single fight we have over the disposition of information: being asked to snitch on patron reading and browsing (backdoors!), being asked to filter the Internet (censorship!), being gouged on e-books (digital monopolies!), being told you can’t scan your own archives (copyright abuse!), and so on.

The present of libraries is that there is a profession of tech-savvy, policy-savvy, *super-organized* people with unimpeachable credentials who operate the very last place in our society where no one expects you to part with money to use it, at a moment when runaway wealth disparity, surveillance capitalism, mass state surveillance, and corruption are the order of the day.

The present of libraries is that they are the secret clubhouses of the resistance.

Perspectives: Your 2008 novel Little Brother was set in California’s San Francisco Bay Area. With the explosion of the tech industry in recent years, this is an apt setting for a science fiction novel about tech-savvy political activists. If you were to set your next novel in Canada what area might you choose and why?

Doctorow: When I set fiction in Canada I usually set it in Toronto for the most boring of reasons: it’s the city I know best, having been raised there. Even now, after the property bubble has destroyed so much of its character and so many of its landmarks, I have a frequently-updated mental map of it, as well as a mental schedule of its rhythms.

My next novel, Walkaway, is set mostly in Ontario, in brownfield sites and post-industrial towns, though some of it is also set in Quebecois asbestos country.

Perspectives: You recently moved from England to the US, but you were born in Canada. How has living in three different countries influenced your writing style and subject matter?

Doctorow: For one thing, I can no longer remember which idioms and spellings are Canadian, UK, or US.

If anything, living in the UK has made me more distrustful of the Canadian/Anglo approach to lawmaking and regulation, which is usually based on the idea that the government and cops can be trusted to interpret the law fairly, so if it is broadly drafted with lots of potential for abuse, there’s no problem, really (cough Bill C-51 cough).

The Canadian version of this is milder, so its deficits are less pronounced, but the UK establishment has so much confidence in the good intentions and judgment of the great and the good that its laws all amount to variations on droit de seigneur.

But honestly, the places I live have much less influence on my life than the reasons I live there. I was born in Canada, moved to San Francisco with a software company I helped start, stayed after the dot-com boom to work for a civil liberties group, moved to the UK to be their European director, stayed after I got married and started a family to write books, moved to Los Angeles to be close to my partners at Boing Boing, to my colleagues at the Electronic Frontier Foundation (EFF), and to my wife’s work. That work is much more influential in terms of my daily round (which, in truth, is either spent alone in a small room with a computer, or on airplanes) than where my meatsuit is hung.